Documentation of The Demonstration of Love 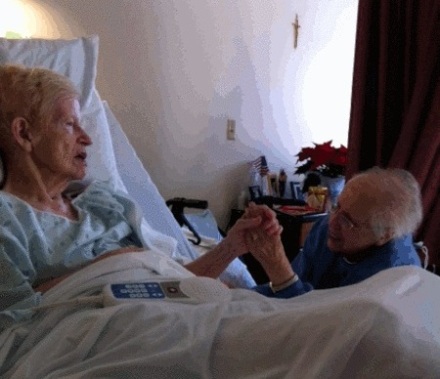 Yesterday, an ICU physician gave me the concept of “The Documentation of The Demonstration of Love.” It is a beautiful concept and especially useful when trying to determine at the end of life, who is truly acting as the next of kin.

This came up because I am litigating a case for two adult daughters and adult son-in-law who were taking care of their father at the end of his life. To their shock, Adult Protective Services jumped in without a court order and took the ailing father off to live with a longtime “lady-friend.” The father, completely incompetent because of long term COPD, told APS and hospice that he wanted to go back to a friend’s home outside of the county.  The man was being loved by his only daughters and son-in-law as well as his grandchildren.  The government brought in a local police officer and literally strapped the dying man to a stretcher and carted him away.  The scene was emotionally charged as Father and Grandpa was being loaded into the back of an ambulance.  They would never see him again.  He would die two months later, but not before the lady-friend changed the life insurance, power of attorney and will.

Is there a value for losing the presence of your dying parent for the last two months of his life? How do you measure the loss of ability to provide loving care for your dying parent? Maybe the better question is, whether a value can be placed on this sacred time.

But, back to the Doctor’s comments about “The Documentation of The Demonstration of Love.” His thought was brilliant.  Just being related by blood. as opposed to friendship, does not mean your loss of time with a dying person has value.  The physician who sees life and death on a daily basis had a keen intuition as to the relationship between the patient and those who have come to be near at the moment of death.  Some might be there looking at their smartphone in the lobby dealing with the guilt of not having been there enough for Mom. There is the family member who is counting down the minutes to inheritance, big or small.  They are there to make sure the troublesome sibling isn’t getting one over.  There are those who are inconvenienced by the process of death.  Imagine the mind of the Doctor whose sole interest is the patient. He is looking for the Documentation of the Demonstration of Love.  Was the family member at the rehab center every day?  Was Mom’s hair brushed by her daughter no matter what meanness came out of the Mother’s mouth controlled by a progressing dementia? Did the family turn their family room into a hospital room?  Was money spent? Are there pictures of smiles and a hand being held?  Or was the grieving “lady-friend,” twenty years his junior, constantly on the receiving end of money from the older man? Were his clothes clean?

Now, the government agency should never have come in and taken a dying elderly man from his only daughters without some court order. It was a screw up when it happened and that is why we have a lawsuit. But having a legal point is not the same as proving the damage that comes from not being their when your Dad is dying.  We have to dig deeper.  We need proof to show; where was the love?

And as we go through life, maybe it’s not a bad idea to live as if you were preparing for a jury trial.  One day there will be a judgment day and someone will ask to see the documentation of the demonstration of love. If it is important to you that you be seen as having loved, then make sure your life is filled with proof.  Did you leave a smile? Did you sacrifice your time? Did you do the tasks that were difficult; like changing a soiled sheet or holding a person’s hair back when they were sick? Did you bring gifts? Did you send cards? If we live our lives knowing that we will be asked to document our love then we will live in peace with our self and the ultimate finder of fact.

This entry was posted on Monday, January 28th, 2013 at 11:06 pm and is filed under Uncategorized. You can follow any responses to this entry through the RSS 2.0 feed. You can leave a response, or trackback from your own site.